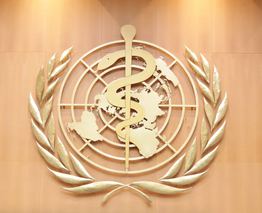 Due to covid, the year 2021 will look different from any other in the history of the UN.  Only the most essential activities will be taking place.  Most civil society activities will be curtailed.  Some will be virtual.  The Commission on the Status of Women 2+ week conference was virtual this year, and while informative, it was very weak compared to the in-person conferences which were buzzing with women working together, networking, teaching, learning, partying.  The tiny 2” boxes of faces could not make up for the lost energy of gathering together.  The Youth Representative initiative, which always added so much to the UN Program will also be cancelled for the year.  So I will occasionally post here online, but it will be a compromised version of our usual engaged group.  I am already looking forward to 2022!

In spite of the enormous cutbacks on in-person activities, the responsibilities of the UN continue.  The pronouncements of Secretary General Guterres are apocalyptic.  He has said, "the state of the natural planet is broken",  we are in "Code Red for humanity", and on the "edge of an abyss".  On the unequal distribution of the covid vaccine, he said:  "this is a moral indictment on the state of our world.  We passed the science test. But we are getting an 'F' in ethics." The Secretary General also stated that global instability, inequality, poverty, the climate crisis reflected "winds of madness" in the world.  Let's commit that we will work to make these winds die down.

In spite of these grim times,  our WCA members have continued to create awe-inspiring and inspirational work.   I will continue to post some of their most impressive shows. 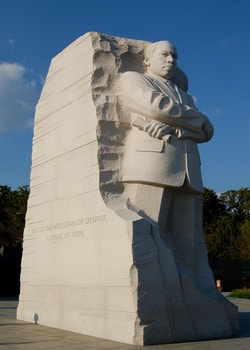 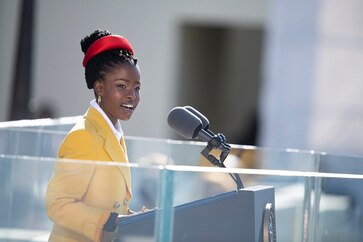 Chairman of Joint Chiefs of Staff

Under President Biden, the United States has re-joined the UN Paris Climate Accord 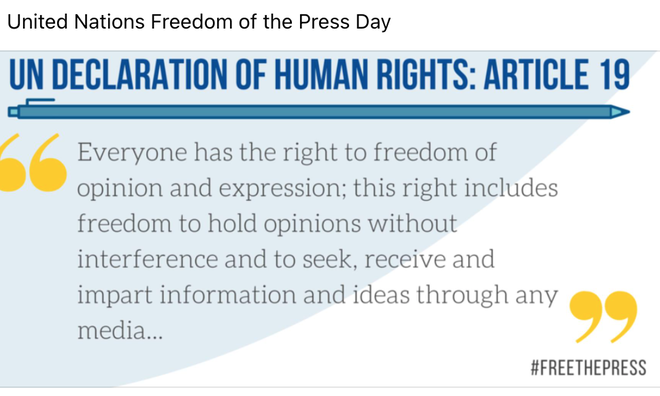 Exhibition at Newhouse Center for Contemporary Art at Snug Harbor Cultural Center, 1000 Richmond Terrace, Staten Island, NY.
Guest curated by Susan Grabel and Stefany Benson.
August 21–December 31, 2021
Through interruptions, censure, violence and threatening behavior — both in person and online — women are silenced every day. Don’t Shut Up presents the work of 47 woman-identifying artists from across the US and Canada who are working to challenge and disrupt the status quo through their ongoing artistic practice. The mission of this exhibition is to provide a platform for those voices, to create awareness and to try to ensure that they are heard, valued and implemented.
#MeToo #NeverthelessShePersisted #DontShutUp #TimesUp.
Newhouse Center website
Image: Talks Too Much, Virginia Maksymowicz
All rights reserved. Images are copyright of artist. 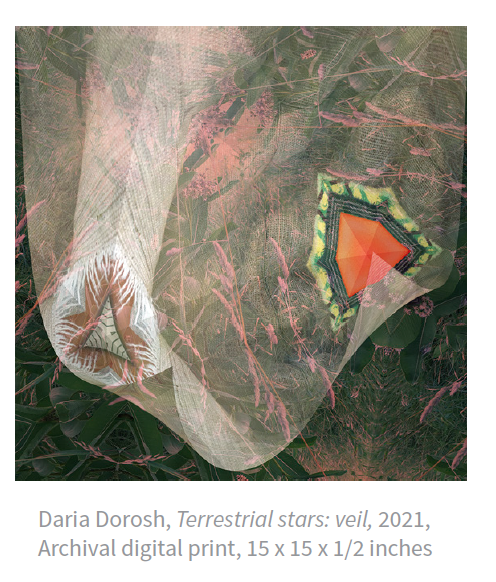 A.I.R. Gallery is pleased to announce Cosmologies, an exhibition of sculpture, digital prints, and art for the body by A.I.R. co-founder Daria Dorosh. Her 25th solo exhibition is presented as a conversation across three scales: Human, Planet, and Cosmos. Through these registers, Dorosh reflects on subjects as varied as selfie narcissism, digital connection, and looming ecological disaster. Textile, one of the oldest human technologies, links these three bodies of work, continuing Dorosh’s two-decade long investigation of art’s place and intent. Cosmologies sees Dorosh incorporating analog techniques with digital processes, ultimately suggesting that the survival of our species lies somewhere in between.

The exhibition opens on the scale of the Human with works that explore pandemic-driven isolation and the possibility of connection offered by video conferencing technologies. Two works, Zoom Selfie #1 and #2, consider our increasingly technologically mediated lives and the ways in which our devices have magnified our obsession with the self. Ashes and Diamonds, a series of braided neckwear pieces, commemorates the events of the previous year by honoring human perseverance and self-compassion through craft and touch.

Planet draws the viewer’s attention to the state of our ecosystem and its life-giving resources. Six digital prints present manipulated views of the Delaware River near Dorosh’s studio juxtaposed with cognitive maps of ecological information culled from the Internet. Taking on the role of “search engine scientist,” Dorosh outfits her digital compositions with handwritten notes detailing atmospheric carbon dioxide levels and the altitude of coastal megacities. Six sculptural wall works combine natural forms and materials with various woven fabrics. These assemblages evoke our cultural evolution with textiles and their countless functions and associations across history—as armor, adornment, comfort, ritual dress, and historical artifact.

In Cosmos, Dorosh offers a kaleidoscopic vision of the merging of the digital and analog, human and natural. In a series of digital prints, titled Terrestrial Stars, appear brilliant fractal patterns produced by digitally manipulating photographs of natural forms and textures. These patterns recall those that make up our universe on infinite scales, from cellular structures and forest roots to stars and galaxies. Fully collapsing the historical tension within the visual arts between abstraction and representation, Dorosh’s works point toward a new reality that is hybrid, collaborative, and constellating.

During the exhibition, Cosmologies will host artists@Home, a portfolio of works by A.I.R. artists responding to the impact of ecological exploitation on our home environment. Featured in the gallery’s lobby, the portfolio is part of Extraction: Art on the Edge of the Abyss, an international public awarenness project initiated by the Codex Foundation and described at extractionart.org.

Daria Dorosh lives in New York City and upstate New York where she and artist John Tomlinson have their studios. She participates in cross-disciplinary networks and projects such as Scalability and BATURU. She continues to research with her PhD community, SMARTlab, in Dublin. Her work is in the Library of Congress, the Smithsonian American Art Museum, the Whitney, and the Special collections archive at the Fashion Institute of Technology as well as private collections. Fashion Lab in Process, LLC, is her research platform to identify new economic models for artists, designers, and creative content creators.
​
​

​In defiance of the Taliban, Afghan women from around the world pose in traditional dress, resisting the hijab and asserting their strength and independence.

STORIES OF THE LAND explores the relationship between human lives and the earth we share.  This exhibition features thirteen Southern California WCA women artists with indigenous, immigrant, enslaved, free, migrant, and refugee roots.  Their artworks forge connections between human lives and the natural world that are intentionally open-ended, often located in lived experience or tied to less publicized parts of history. 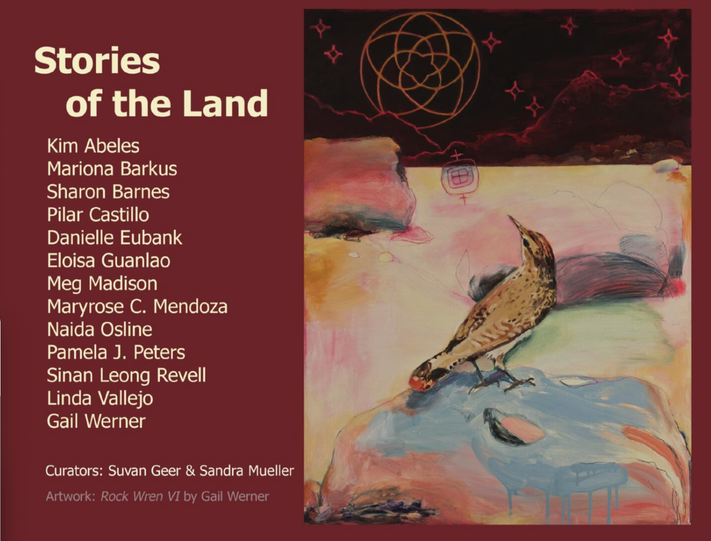 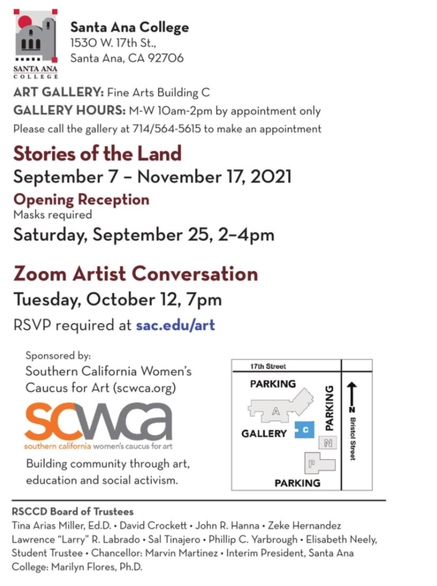 Writer Director Producer and Performance Artist Ann P Meredith is one of 3000 New York City-based artists to receive $5,000 through the City Artist Corps Grants program, presented by The New York Foundation for the Arts (NYFA) and the New York City Department of Cultural Affairs (DCLA), with support from the Mayor’s Office of Media and Entertainment (MOME) as well as Queens Theatre. See www.annpmeredith.com.

Meredith’s passionate and compelling Script offers Evocative and Convincing roles telling a Universal Story with an Inspiring Message.
“Ann’s work merits attention, provocative and self-expressive and as a dedicated artist Ann makes Art that is upfront, easily conveyed to a wide audience and stimulates discussion as her message deals with contemporary issues completely relevant to the world we live in.” -Agnes Gund President Emeritas MOMA.

​Betsy Damon (b. 1940) started doing performance with the Feminist Art Studio, which she founded at Cornell University in 1972. Activism and community-building have been central to her feminist practice. A leader among lesbian activists in New York, she co-edited the third issue of Heresies, Lesbian Art and Artists (1977), and participated in the first lesbian art show in the U.S., curated by Harmony Hammond at 112 Greene Street (1978), and The Great American Lesbian Art Show at the Woman's Building in Los Angeles (1980).

Her early performances addressed the erasure of women’s narratives from history (Blind Beggarwoman, 1979-80, alluding to Homer), and gender-based violence (7,000 Old Year Woman, 1977-78; Rape Memory, 1978-79; What Do You Think About Knives?, 1980-81). Their non-conformist courage consisted not just in their subjects but – strikingly – also taking them out to the streets of New York and other cities, often without an institutional umbrella. All of them placed woman’s agency in the center of public space. Damon's performances as healing rituals soon grew to include concern for the environment (A Shrine for Everywoman, 1980-88 and Meditations with Stones for the Survival of the Planet, 1982-late 1980s), and she devoted her later practice to public space projects focused on preserving living water. Today, she is regarded as one of the most relevant pioneer ecofeminist artists; her social practice attracting a growing interest globally.

The exhibition presents how the distinctive vocabulary of Damon’s performance art – performing outdoors in city streets, inviting audience and other artists’ participation, employing archetypes and elements of ritual, and her engagement with transnational feminism – informed the development of her later practice. 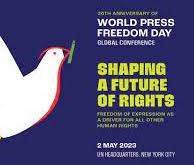 HUGE DISAPPOINTMENT AT COP26
The United Nations Conference, COP26, in Glasgow Scotland was an enormous disappointment. It was especially disappointing after the success of the Paris Climate Accords.  With guest speakers pleading for quick, serious reform, the results of decisions made by participating governments were more like business as usual.  No sense of urgency could be seen in the final outcomes.  There was a commitment to reduce methane gas, protect forests (especially the Amazon) and to scale back support for fossil fuels.  All valuable goals, but not enough to address the climate crisis in a significant way.

​There were impassioned speeches, none more potent than Sir David Attenborough.www.youtube.com/watch?v=A6SO0xkr_uI 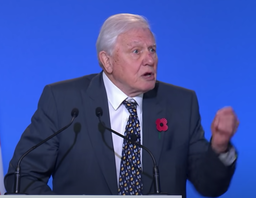 Also presenting with great fervor was Osprey Orielle Lake, Director of WECAN, and partner to WCA:
"We will not allow for sacrifice people, sacrifice zones, corporate colonialism, incremental transitions to renewable energy, or false solutions like carbon offset schemes instead of stopping pollution at the source.  And we actually don't want net zero.  We want real zero, and we want it now...."  She called for advancing climate justice, women, community, and indigenous leaders involvement in decision making and discontinuing use of fossil fuels.

The big take-away was that it will be civil society and NGO's who must carry the load, who must create desired change, and hopefully governments will follow the lead of the people. The UN Secretary General made it abundantly clear that he is on the side of the people, not the governments.  The Civil Society side events of COP26 which were held parallel to the conference were full of dynamic and unwavering determination and energy.  It is now up to us as members of civil society, and NGO's.
Over 100,000 march in protest to demand quicker and more substantial results from the Glasgow COP Summit.  NGO's at the forefront!

​AS MEMBERS OF WCA, WHICH HAS A LONG STANDING HISTORY OF BEING A RESPECTED NGO,  WE MUST INDIVIDUALLY COMMIT TO DOING WHATEVER WE CAN, BIG OR SMALL, TO AVERT THE DEVASTATION COMING OUR WAY.

THE EXHIBITION OPENS from December 14 – 24, 2021.
The gallery is located at 547 West 27th Street, Suite 201, Manhattan.  For additional information visit  https://ceresgallery.org   Phone: 212-947-6100. Email: art@ceresgallery.org  Press Contact: M. Annenberg, Phone 917-587-9014.
LIVE EDUCATIONAL PROGRAM
Saturday, December 18, 2021, 2:30pm - 4:30 pm, featuring Paul Miller a/k/a DJ Spooky, who will speak about Antarctica, his composition Terra Nova: Sinfonia Antarctica, and his book, The Book of Ice; Dr. Klaus H. Jacob, a geophysicist with the Earth Institute, who will discuss the rise in sea levels; and  Elly Lessin,  co-founder Drawdown New York City, who will present solutions to global warming. RSVP: art@ceresgallery.org.
PODCAST INTERVIEW BY PROJECT CENSORED
STAY TUNED! In December, M. Annenberg will be interviewed on radio by Project Censored (https://www.projectcensored.org) which will include excerpts from the panel discussions recorded during The EARTH ON THE EDGE Exhibition. 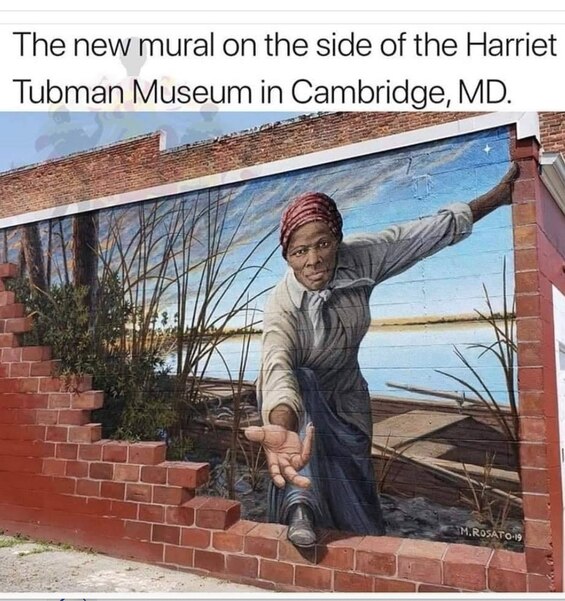