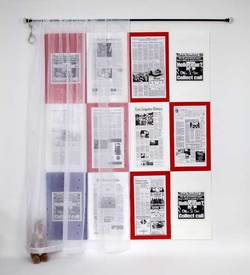 From her website: "Conceived as a metaphor from the game of chess, the artwork, Check, Checkmate, takes the global warming debate beyond partisan politics. It examines the role American media plays in the lack of public response to our urgent climate crises. Both on air and in print, certain media outlets participate in ongoing omissions and misinformation concerning scientific research into climactic change. The release of the IPCC report, from the Intergovernmental Panel on Climate Change, should settle the debate once and for all. It is neither Democratic, Independent or Republican. It is international. The report states that the warming of the atmosphere and the oceans is unequivocal and that it is the result of human activity.
In chess, the status of checkmate means game over. Dr. James Hansen’s recent editorial, Game Over for the Climate, reveals that we are at a point of no return in terms of greenhouse gas emissions. This NASA scientist, a political independent, once called upon by the Bush administration for climate advice, has resorted to chaining himself to the gates of the White House to get attention focused on the urgency of climate remediation. Unfortunately, this action was barely covered by the national press. My artwork, Early Wednesday Morning , documents this lack of coverage.
With the imminent loss of Antarctic ice masses, one has to wonder why certain media outlets, refuse to acknowledge the work of 259 lead authors, and 600 contributing authors, including scientists from 39 countries, involved in researching with the first working group, for the fifth assessment report. In an era of irreversible climate change, the decision not to publish the IPCC Report is neither neutral nor benign. On September 28, 2013, the day after the release of the Summary for Policy Makers, of the Physical Science Basis of Climate Change, from this report, the New York Post carried no mention of it, although several other papers did.
Does a free press, guaranteed by our constitution, mean that our press is free not to report the news? Investigating the prominence and placement given to the reporting of this document, ironically focused on the absence of the presence of this research and its conclusions. The misuse of public airwaves and the press allegedly for the public good, instead confuses the public with misinformation on research agreed upon by the majority of the world’s climate scientists. Media barons, who use the press to delegitimize scientific data, results in a lack of public engagement on this issue, thereby enabling the obstruction of coherent legislation to deal with this problem. Extraneous issues, such as the re-emergence of Monica Lewinsky, capture the public’s attention, as a diversion to the actual coverage of an issue that threatens the continuation of life as we know it. The disturbance to our ecosystems and the perils that future generations will face, place the omission of this news in a new category. As greenhouse gas emissions continue to rise, from the burning of coal, gas and oil, the public is rendered unknowing and impotent, as destruction and ecocide, rage onward." 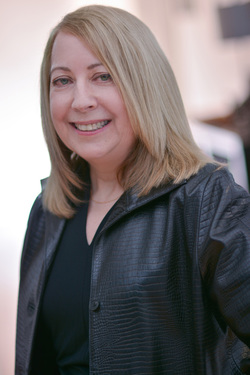 Marcia Annenberg’s current paintings, sculpture, installations and videos focus on under-reported stories in American media: from 9/11, to climate change, to the loss of our constitutional protections. She was invited to speak at Princeton University’s Bernstein Gallery, in conjunction with her exhibit, News/ Not News. Her panel at Flomenhaft Gallery, entitled, Art, Activism and Global Warming included Dr. Gavin Schmidt, Director, NASA, Goddard Institute for Space Studies. Her paintings and installations have been featured in solo and group exhibitions in museums and galleries throughout the United States, including Flomenhaft Gallery, NYC; the Butler Institute of American Art in Youngstown, Ohio; the Red Chair Gallery in Kansas City, Missouri,;The Pierro Gallery of South Orange, New Jersey; Princeton University’s Bernstein Gallery, Princeton, New Jersey and the Women’s Museum in Dallas, Texas. Annenberg’s paintings are in the permanent collections of the London Jewish Museum of Art, England; the Yad Vashem Art Museum in Jerusalem, Israel; the Vilna Gaon Jewish State Museum in Vilnius, Lithuania and the Florida Holocaust Museum,
​                                                                   St. Petersburg, USA.
​
Her  artwork is discussed in the BBC documentary The Private Life of a Masterpiece III in the episode “The Third of May”, which examines the history, signiﬁcance and contemporary resonance of Goya’s inﬂuence. Images of her work have been published as cover art for The Holocaust and Other Genocides: History, Representation, Ethics edited by Helmut Walser Smith (Vanderbilt University Press) and Project Censored, 2014, edited by Mickey Huff and Andy Lee Roth (Seven Stories Press).

She studied at the Art Students League with Isaac Soyer and Robert Beverly Hale and later received an M.A. in Studio Art from New York University.

Marcia has been currently named by ORIGIN Magazine as one of the top 100 Creatives of 2015 in North America.